Kombucha- a mushroom tea with a taste of cider and a power to heal!

Chicago Internal Cleansing > Healthy Eating > Kombucha- a mushroom tea with a taste of cider and a power to heal! 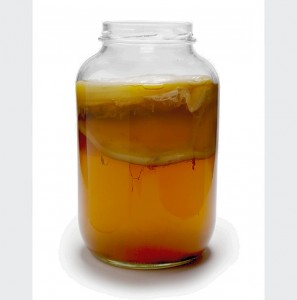 Kombucha is a fermented “live” beverage which by taste and consistency reminds of an interesting combination between a cider and champagne. However, behind the sourish bubbles, are hidden amazing healing qualities.

The starting product for this awesome mushroom tea is the shroom Medusomyces gisevii Lindau, which is formed by gelatine-like membrane in the shape of a flat disk. The mushroom lives in a solution of tea and sugar in which it constantly multiplies- that is why is known as “tea mushroom”. Kombucha is a true mini biochemical laboratory- the mushroom itself is constantly feeding and thus triggering various processes of fusion and fission which release numerous valuable substances with curative properties.

Historical summary of the Kombucha:
First written proof of the kombucha dates back to 221 BC and the dynasty Cyn in the Chinese empire where the mushroom was called “medicine for immortality.” From there it spreads throughout the East, Pacific, India, Russia and Germany. In Russia, kombucha wins fame in the early XX century. Back then, because of the frequent cases of cancer, researchers noticed that in some areas of theUrals the morbidity is very low. Turned out that in those areas are inhabited by many centenarians who traditionally consume kombucha or as they call “tea kvass”. The Kombucha tea mushroom does not “arrive” in the United States until the early 90s and as usual, the pharmaceutical industry was not interested in exploring the healing properties of fungus that reproduces itself and from which everyone can produce gallons of tea at home.

However, in recent years Kombucha is spoken for as one of the most effective means of alternative medicine in combating serious immune disorders, cancers and even HIV.

The voice of science:
So far, there are not many studies conducted with humans, however, the individual active substances of the Kombucha are quite well researched. Today scientists are explicit about the cleansing effect Kombucha has on the human body and especially the digestive system.

The effect of the Kombucha explained:

When entering in the stomach, the mushroom tea floods it with digestive enzymes and probiotic organisms that immediately begin to break down the undigested food and waste products while destroying pathogenic organisms before they enter the bloodstream. While the probiotics cleanse the digestive tract producing organic acids and vitamins B, this enhances the cleansing process and balances the level of acidity in the digestive tract.

Everything you need to make your kombucha at home is 6 tablespoons tea, 6 cups of water, 1 cup of sugar, and of course, the mother mushroom. You can use black or green tea or a combination of both. Do not use tea sachets or tea bags. It is particularly important that the tea you put in contains caffeine as kombucha feeds on it. Herbal teas and “Earl Grey” are not suitable for the breeding of kombucha. Also avoid tap water – it contains chlorine, which can damage the growth of the mushroom. Purified, distilled, or spring water is the best choice. Sugar is the main energy source of Kombucha during fermentation, so it is best if you use organic white sugar. However, If you use green tea, put brown sugar. In the process of absorption of sugar organic acids and carbon dioxide are emitted, which provides the characteristic pungent flavor of fizzy kombucha. The longer you grow it, the lower will be the final sugar content in theresulting drink. 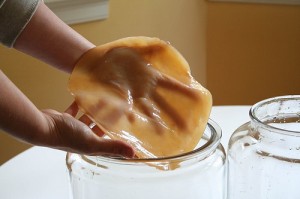 1 Boil the tea, strain it and add sugar.
2 Put the sponge in a sufficiently wide and deep bowl and pour in the cooled and sweetened tea.

3 Cover the container with a cloth (with sufficient porosity to allow the fungus to breathe) and tighten with a rubber band – this protects not enter other microorganisms or insects and not to trigger the process of condensation. Leave it in a dry, cool and dark place for 1 week.

4 By the second week you will see the bubbles and the newly formed sponge on top. You can now separate the mushrooms and pour the liquid into bottles that close well. It is best to storage them in a place that has a temperature slightly higher than room temperature (for example, behind the door of the refrigerator where they could fizz further more.

5 After a few days, you can transfer the bottles in the fridge as they will be ready for consumption. Of the remaining mushrooms, you can go on to make new tea. 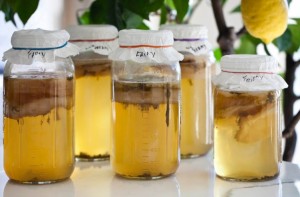 – Kombucha gets easily polluted, so make sure your hands and the utensils you use are clean at every stage of the process.

– Do not use a metal container to grow kombucha – metal reacts with the acids.

– If you notice mold on the surface (deep green, blue or black), immediately discard the sponge with the liquid.

– Kombucha needs a warm and peaceful place – the temperature should not drop below 68F, and should not exceed 86F. The higher the temperature, the more rapidly develop during fermentation. After placing the container at one particular place, do not move it.

– When you start preparing a new batch kombucha, always add 10% of the tea you have already made to the new fermenting mushroom. 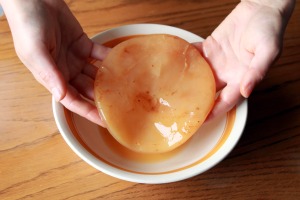 Because of its alcohol content (usually around 0.5%, but can reach more than of a beer) and caffeine, possible allergies and blood-thinning effect could be expected. Kombucha is not recommended if you have surgery, are pregnant or breast-feeding, and for children under 4 years.